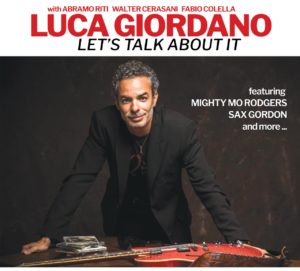 Let’s Talk About it – Luca Giordano

A collection of stories and feelings from past years , produced and mixed by Fabio Colella (SASHA STUDIOS – Trasacco Italy);

The core of the Band on the cd is formed by Luca Giordano on Guitar and Vocals, virtuoso Hammond and Piano player Abramo Riti, Walter Cerasani on Bass and drummer and Producer Fabio Colella.

The CD features the great legendary Mighty Mo Rodgers (Blues Prophet who produced Sonny Terry and Brownie Mc Ghee), and the explosive Tenor Player Sax Gordon (one of the most requested artists on Blues and Soul Recordings nowadays) who wrote horns arrangements for 4 songs on the cd. 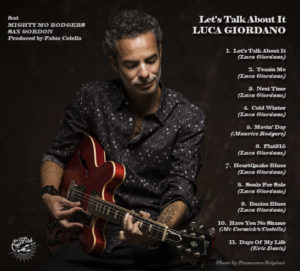