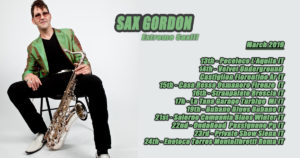 The most extreme Sax in the business gonna be on tour in Italy on March 2019!!!

No other performer on the scene today brings to life and pushes forward the great tradition of American R&B Sax like Sax Gordon.

After a long career backing up giants like Johnny Heartsman, Jimmy Witherspoon, Jay McShann, Solomon Burke, Clarence “Gatemouth” Brown, Little Milton and many others, today Gordon can be found leading his own groups worldwide as well as appearing as a special guest with groups all over the globe .

On this March tour he will be backed up by the Luca Giordano, and more touring toghether will happen again in July 2019 with amazing Soul singer Mr Leon Beal (more details will come soon .. )