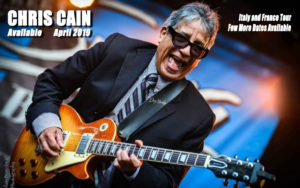 Its almost time again for the one and only Master guitar player CHRIS CAIN  to come back to Europe for a spring tour!!!

Backed up by Luca Giordano and his band, Chris Cain, considered one of the top 10 guitar players in the world, will be touring Italy and France from 3rd till 15th April 2019.

Here there are a couple of videos from past years tours: